Today is my two-year anniversary at WorkOS.

I missed writing down my thoughts on my first anniversary, so it's time to turn back the clock a ways and explain how I ended up here.

In Search of Single Sign-On...

Back in early 2020 I was working at Gravic. At the time, we were trying to land some site deals with universities, many of which were contingent on them being able to sign into our product using single sign-on (SSO).

I ended up with the task of figuring out how to add SSO to our product.

As I began to research the space, it seemed there were two options:

Neither of these options seemed particularly attractive.

In the midst of facing this conundrum, a tweet from Justin Duke1 appeared in my Twitter feed: 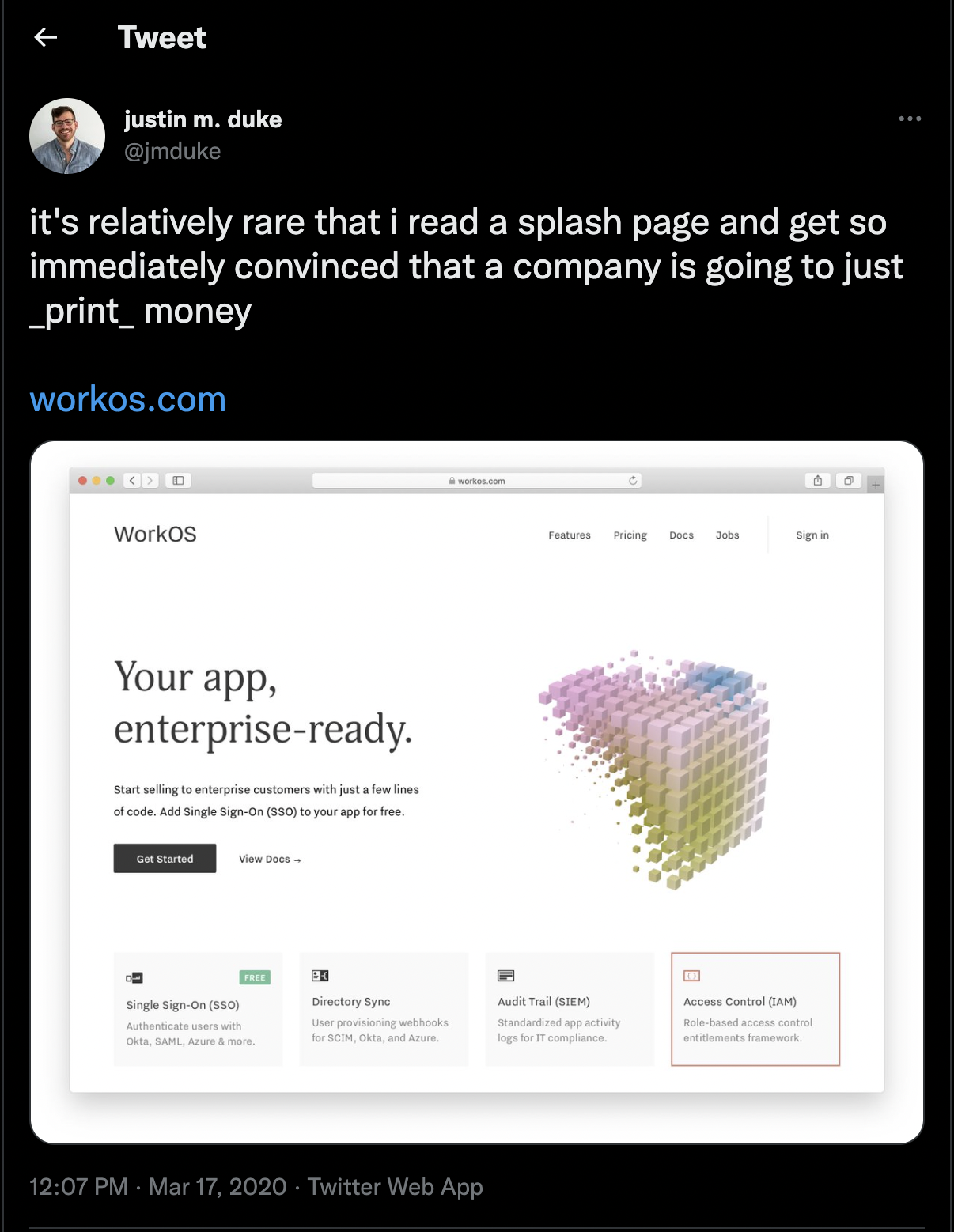 Intrigued, I clicked through to workos.com and my eyes lit up as I realized a third option had presented itself: we could use WorkOS for SSO.

Over the next few weeks I put together a proposal and proceeded to add SSO to our system, using WorkOS for all of the hard bits. It was painless.

Fast forward a few months and I was ready for something new. With COVID still raging and a mandatory return to the office looming in the new year, I decided to start searching for greener—and more remote—pastures.

Having used WorkOS to solve my own problems, I knew firsthand just how much value the product brings to the table. I'd also interacted with some of the folks at WorkOS over the course of my integration and had a really positive experience doing so.

With that in mind, I decided to apply to WorkOS.

This was my first time interviewing at a company, so to say I was nervous would be an understatement. Thankfully, WorkOS had (and still has) an excellent, no-nonsense interview process. Not once in the process did I feel like I was being evaluated unfairly or being asked to do something that didn't reflect what I'd be doing day-to-day2.

It's now been two years since my first official day in our lovely virtual office.

In that time I've worn many hats and worked on everything from signup and billing flows to migrating databases between providers with zero downtime.

I've seen colleagues come and go, watched the company grow and change as more faces fill up the Zoom gallery in our weekly All Hands, and done some of the best work of my career thus far.

I'm consistently impressed by just how talented the people I get to work with everyday are. You don't have to look much further than the brand new docs that launched earlier this year to see mastery of craft and an incredible eye for detail.

Of course, talent alone is not what makes WorkOS great. Underpinning everything is kindness, something that is reflected in one of our operating principles: "Be Kind".

I consider myself blessed to have the opportunity to work alongside such kind and talented individuals. I try my best not to take that for granted.

The past two years at WorkOS have been the best kind of adventure, and I'm looking forward to many more.